I haven't touched my Zenfulness blog in ages, but boy am I ever suffering from a deluge of comment spam. I'm sure I don't get nearly as much as some more popular blogs, yet the 20 spam comments I get a day do feel like quite a bit. If I could get my hands on the punks who keep spamming my blog... well, I probably wouldn't do anything since I'm not really the violent sort. It's nice to picture a nice punch to the gut or a knuckle strike to the temple though. At the very least, I'd really enjoy giving them an atomic wedgie in public.

With Thanksgiving right around the corner, my thoughts return to reveries of the mythical tofurducken. I don't really know if it exists or if it is merely a fantastic creation of my crazed mind. In case you're wondering what the heck a tofurducken is, just look up turducken. The turducken is a fowl Frankenstein creation. I imagine the vegetarian equivalent of it around this time of year. The closest thing I could find on the internet was some person's reference to a "tofucken" which my juvenille sense of humor found funny. I did come up with my own recipe involving wheat gluten, mushroms, tofu skins, and pressed/frozen tofu. I never tried out my recipe though, and given my huge amount of free time, I probably won't be doing so in the near future.

And while I'm on the subject of foul foods, I read a disturbing article on Treehugger today. We hear the scary stories about melamine in Chinese food products, but apparently, melamine is pretty common in U.S. food products, too. And even being a vegetarian doesn't spare me the exposure since it can be used as a crop fertilizer which not only gets into the food supply, but also taints the soil and environment. I already think that the U.S. as a country eats crap for food, but this only re-inforces that perception. Industrial agriculture and food production is more concerned with making money than providing real food. And the fact that the food production is so far separated from the everyday consumer means that most people have no idea how potentially bad their food is.

So, to sign off on a more positive note, appreciate the good food you eat this Thanksgiving. Hopefully, the meal will be blessed with lots of whole, nutritious foods.
Posted by jkuo at 11/24/2008 11:57:00 PM No comments:

Have I become a fitness snob?

I think I have. I actually analyze people's workouts when I go to the gym and give a thumbs up and thumbs down approval rating. Mostly, it's a thumbs down rating since what I see people doing doesn't (in my opinion) do much for their fitness. People spend way too much time on cardio machines doing long, even paced workouts. I don't know about you, but that would bore me senseless. I need to vary my pace and rhythm and get done quickly. I don't have an hour free to burn on an elliptical machine, or God forbid, a treadmill. I'd rather do rope or run sprints for 15 minutes and be done. Fifteen minutes of high intensity interval training (HIIT) will beat an hour of slow, even-paced cardio every time. 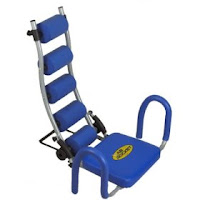 Today, I just came across an ad for the "Ab Rocket Abdominal Trainer." Devices like these don't rank high on my list of worthwhile purchases. It's a marketing gimmick, and I think it's more than likely total crap. I guess I can see how it'll give some people an ab workout, but if you honestly expect to get strong abs from this thing, you're delusional. People put far too much effort into training their rectus abdominus (the muscles that you see in six-pack abs). Ironically, those muscles aren't really the most important ab muscles for core strength. The obliques (internal, external, and transverse) are probably more important for core stability and strength. Overemphasizing the rectus abdominus serves no purpose other than causing "poochy belly" because the other abs aren't proportionally strong enough to hold the over-developed rectus abdominus flat. To add insult to injury, working the rectus abdominus more with tons of crunches won't actually give you a six pack unless you drop your body fat with smart exercising and a healthy diet.

Anyhow, I digress. If you really want to develop strong abs, do exercises that challenge your entire core. Stabilizing yourself on the rings, throwing and catching a medicine ball, yoga, pilates, etc. all develop your core. Heck, you can drop the ab exercises all together and just do proper full range of motion squats. You'll develop strong abs with weighted squats a lot faster that you will with overpriced, gimmicky devices that you see on infomercials. And you'll get toned legs at the same time. The more I think about it, the more squats sound like a cheaper and more efficient exercise than ab-rocketing the money from my wallet to the black hole of questionable exercise gadgets.
Posted by jkuo at 11/19/2008 12:00:00 PM No comments:

I actually had some time to cook this past weekend, which is a rare thing. Of course, I also got some new kitchen toys which provided me extra motivation to do some cooking. I just got a pressure cooker and a new stir fry pan, both of which I'm really digging. I managed to make red bean soup in 20 minutes (usually takes me 8 hours or more in the slow cooker). Then, I blasted some dried chickpeas in about 20 minutes, and then made a yummy chickpea/lentil curry in about 30 minutes. I've discovered though that the advertised cook times on the pressure cooker are a little deceiving; they don't include the time it takes to bring the water up to a boil and pressurize the pot. That time is not insignificant when you've got a 8 quart pot. Nevertheless, the pressure cooker was still a heck of a lot faster than cooking in a normal pot.

I also managed to bake some acorn squash and roast the seeds. The seeds do take a while since you have to separate them out from the pulpy mass in the middle of the squash. Yet, there's something deeply satisfying about working with your hands, even if you're running your fingers through squishy, slimy pulp. Despite the time drain of roasting the seeds, I still enjoyed the process as it was a time I could just reflect in peace. And we get a small container of yummy roasted seeds, which is always a plus.
Posted by jkuo at 11/18/2008 11:52:00 PM No comments:

In my last blog post, I mentioned how my computers are getting a little long in the tooth. I'm still perfectly happy with them, though I will admit to having weak moments of tech-lust during those rare instances when I feel my computer is really dragging. It's also appalling that I'm actually wanting to get a Mac when I've been a PC guy all my life. I nearly broke down and bought a Macbook, but discipline (a.k.a. my cheapskate instincts) prevailed.

I did break down and upgrade my desktop though. I'm now up to a whopping 2 gigs of ram, and I'm now sporting a 22" lcd monitor. I spent an embarassing amount of time researching lcd monitors; I now know what the performance difference is between different types of LCD panels, backlight technology, and more than I ever cared to know about color fidelity. And I still ended up just purchasing a cheap TN panel (which to be fair did get good reviews). I just couldn't bring myself to fork out a few hundred (possibly thousand) dollars more for the uber high color fidelity and massive view angle of an S-IPS panel. I just don't do serious enough artistic work on my monitor to need it, though I will admit, a high end S-IPS lcd monitor still is on my tech-lust wish list.

So, I haven't done much with my computer, but the new monitor and upgraded ram makes my computer feel newer. My computer is still technologically ancient, but it's been given a second wind. We'll see how long I can hold out before I join the dark side (a.k.a. the Mac world).
Posted by jkuo at 11/13/2008 10:52:00 PM No comments: