Adventures on the road

Well, I just got back from a trip to NC for another I-Liq Chuan (ILC) workshop. I successfully tested up to instructor level 1. I sort of expected to pass, though I was a little worried when I had to demonstrate applications for a few moves which I normally don't contemplate much. Fittingly enough, the mindfulness training inherent to ILC helped me stay calm and adapt to the circumstances. I managed to eke out a believable understanding of the 21-form. I also nearly slipped when doing the butterfly form (note to self: in future, don't wear socks on a slick wooden floor when performing fast, force issuing moves). That probably wouldn't have looked great to be in the middle of a throwing move and having my feet fly up in the air.

This time I drove down to NC, and I have to say that I remember why I started flying there. Seven hours in a car (each way) is dreadfully tiring for a weekend trip drive. To make matters worse, the windshield wipers on my car don't work right. I have to push the wash windshield button to get the wipers to turn on and wipe once. Conveniently, the instant I find out my wipers don't work is when it rains. I probably drained my windshield wiper fluid reservoir by the time I got to Richmond.
Posted by jkuo at 3/31/2008 02:45:00 PM No comments:

While I'm on the topic of food, I came across this in the news today:

"A growing trend in all-you-can-eat seating at sports venues is making baseball's summer chorus sound more like "Take Me Out to the Buffet.''

Dozens of arenas, stadiums and tracks are offering tickets that come with unlimited snacks. The seats have been a hit with fans, a money-maker for the venues and a worry for obesity-conscious health officials."

Links to the news are on USAToday and Toronto Star. I personally found the news to be pretty appalling.

I understand that all you can eat can be enticing, especially since the human body is programmed for an environment of scarcity rather than the environment of plenty that we actually live in. But it seems to me that this all you can eat gimmick is a sign of how screwed up the U.S. relationship to food and consumerism is. The sports venues are obviously trying to entice more fans to the game and increase the bottom line, while disregarding the health and well-being of their customers. The consumers on the other hand are falling into the trap of getting a "deal" on cheap food, even though the "food" isn't that great and has a negative health impact.

Now, if there was unlimited whole grain pita chips, hummus, and fresh organic seasonal fruits and veggies, you might see me heading out to the ball park. Alas, that will probably never happen. No one would pay the price for real food, and sadly, a lot of people probably wouldn't even eat healthy, wholesome offerings.
Posted by jkuo at 3/24/2008 12:36:00 PM No comments: 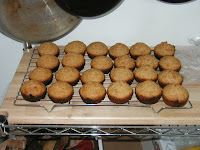 This past Sunday was yet another cooking marathon for Gen and me. Sometimes I wished that we could buy more prepared food, but our food standards are too healthy (and we're too frugal) to go that route. So, we're stuck cooking essentially all of our meals.

The last batch of cornbread I made actually went bad after a few days, despite my cookbook's claim that cornbread keeps for a week when tightly covered in plastic wrap. This week, I decided to try to the cornbread muffin route so that the cornbread would be in convenient single serving sizes and could be easily stuffed in a tupperware for freezing. I'm quite pleased with this week's baking experiment, though I have come to realize that our muffin tins totally suck. Apparently, these tins are from the spray-on teflon generation where the teflon doesn't really stay bonded to the tin very well. Gen scraped off the teflon flakes while I proceeded to admire my baking handiwork.

I also baked some more whole wheat flatbread. I think I'm getting the hang of controlling whether I get crackers or flatbread. If I crank the oven up to 450F and roll the dough a little thinner, I get something more cracker-like. If I roll slightly thicker and bake at 400F or lower, I usually get a flatbread type bread. Pretty intuitive, huh? It only took 3 attempts for my engineering skills to figure that one out. Some pieces formed pockets, which leads Gen and I to believe that we can attempt pita bread in the future.

I think I'll probably keep up the flatbread and cracker baking on a regular basis. I might as well be eating my own processed carbs rather than the even more highly refined store bought stuff. My cooking idol Alton Brown says, "I love crackers, and I'm not about to trust their production to anyone (especially elves in hollow trees)." I concur.
Posted by jkuo at 3/23/2008 11:56:00 PM No comments: 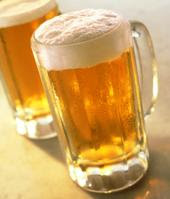 A recent New York Times article discussed a study from the Czech Republic showing an inverse correlation between the amount of beer scientists drink and their research publication success. At first I thought the article was going to show a one to one beer and science success correlation and was worried that my being completely dry was the cause of my short CV publication list. Then I got deeper into the article and saw that there's still hope for me yet to have an absurdly long publication record. So, thanks Dad. Giving me a sip of your beer when I was 5 so effectively turned me off to the idea of alcohol that I'm bound to have a huge upsurge in my publications... yes, it should start happening any day now...

Of course, the article does go on to state that correlation does not mean causation (and anyone that thinks otherwise is ripe for mental manipulation). It could very well be publication success that's driving the beer drinking habit: the poor sots who can't publish a thing might be drowning their sorrows with their good ole friend Al Key Hall.

The study reminded me of other amusing correlations I've read about in the past. I remember way back in the day, when I was a young whipper snapper in college, I heard about a study showing a correlation between coffee drinking and women's feeling of success in their lives. Granted, I never read the original paper, but the first thing that came to my mind was how in the world they published such a ridiculous paper. It seems quite clear that women who need to wake up in the morning (i.e. having work or other stuff to do) would likely be drinking coffee and working their way to success in life. 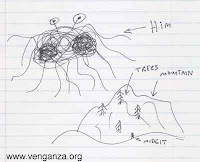 Another fun example is the correlation between cow populations and global warming. While there is some truth in cow farts being a source of greenhouse gas methane, cows are definitely not the underlying cause. The last funny example I came across is from the Pastafarians of Flying Spaghetti Monster (FSM) fame. They've noted a strong inverse correlation between the global average temperature and the number of pirates in the world. Who knew? Yargh... apparently, the old Pastafarian salts received some noodly strands of knowledge from the FSM.
Posted by jkuo at 3/20/2008 10:24:00 PM No comments:

Some things in life you just like to have and really notice when they're not around. Nowadays, sleep seems to be one of those luxuries, though that may be my own fault for having too many things to do and developing bad sleeping habits as a result. This weekend, the boiler in our apartment shut down for some unknown reason. Normally, I'd tinker to try fixing it, but it's not actually my property, and I wouldn't say that I'm the world's best home repair guy when it comes to hot water heating. We were only without hot water (and consequently also heat) for a little less than a day, but those hours without hot water were a real drag. I really do crave a steamy hot shower at least once a day. It's a creature comfort that makes my life a lot more pleasant. Maybe it's not so bad that we went without it for a few hours though. The temporary scarcity serves as a reminder to truly appreciate what is taken for granted as an everyday comfort.

On another note, this weekend was the St. Patrick's Day weekend. Of course, I was completely oblivious to the holiday since I'm not Irish, don't drink, and live in a strange bubble cut off from these bits of information. Anyhow, I was quickly made aware of the holiday by the throngs of green-clothed people all over Philadelphia over the weekend. There were even small crowds of green people around University City at 8:45 a.m. on Saturday morning. And they were all apparently going bar hopping. I can appreciate people wanting to celebrate, but starting a quest for alcohol at 8:45 a.m. seems just a bit excessive. By the late afternoon, there were already drunk people riding the trains. I don't know about you, but I find the idea of being intoxicated by 3:30 p.m. is IMO just a tiny bit disturbing, especially considering that I'm sure these revelers were probably going to be drinking into the night. Maybe I just value my mental faculties and liver health too much.
Posted by jkuo at 3/16/2008 10:49:00 PM No comments:

Well, it didn't take me very long to meet my New Year's resolutions (just under 12 weeks). I think I can now safely assume I've met them. A few days ago, I managed to jump rope for 15 continuous minutes, upped from my original resolution for 10 minutes. I'd increase it again, but I start getting bored after 10 minutes. I've been keeping my routine fresh by upping my speed to 180 turns/min and mixing up my footwork. So, in summary: jump rope fitness goal definitely achieved.

Though my worthless body fat analyzer doesn't tell me anything useful, I'm pretty sure I've dropped 1% body fat. Since last Thanksgiving, I've dropped over 10lbs in weight without any perceived loss in strength. And since my abs are starting to show, I'm think my body fat percentage is probably approaching single digits. I'm not quite at a 6-pack yet, so according to the muscle nuts at Testosterone Nation, my body fat percentage is still double digit. Maybe in another couple of months, I'll have both my resolution and my vain ego fulfilled.
Posted by jkuo at 3/12/2008 12:14:00 AM No comments:

Super Sunday (aka the Iron Chef is a pansy)

This weekend was crazy packed. No, it wasn't from all wild partying, which is definitely not my usual weekend fare anyhow. I spent a most of the weekend cooking up a storm. Now that we're eating 5-6 times a day (smaller meals), cooking lots of food is a necessity. I spent almost all Sunday (and part of Saturday) making all our food for the week:

I also made extra mirepoix for a tomato sauce which Gen actually finished because I was too tired/lazy after my cooking marathon to finish. Gen also made the vegannaise for our salad and sandwich dinner.

Believe it or not, I had actually contemplated three more food items (quesadillas, Thai curry, and pesto), but I was lacking in either ingredients or energy. As much food as that is, I actually anticipate needing to cook more by Friday. *Sigh*
Posted by jkuo at 3/10/2008 01:17:00 PM No comments:

You just can't make this stuff up 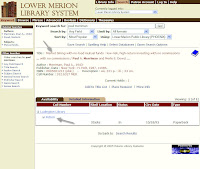 Gen found this gem on the local library catalog the other day (click on picture to see it full size). I know a lot of financial schemes are scams that prey on the gullible and weak-minded, but maybe the librarian overreacted just a bit with this book.
Posted by jkuo at 3/02/2008 10:26:00 PM No comments: