In my continuing quest to simplify my life, I've started standardizing some things in my life. Part of that has been about developing routines to simplify my day-to-day life, although that's not really different than how I normally operate. Everyone will develop daily routines to efficiently get through mundane tasks and move on to dealing with the rest of the day. Mostly though, I've been moving towards standardizing my possessions and things I need to use. Simplifying the products I use has made my daily life less of a hassle. The things I've changed include:

There are some other things I'm working my way to standardizing:

And of course, there are things over which I have no control that I wish were more standardized:

Lessons from Fist of the North Star, part II

I am now nearly 60 episodes into Fist of the North Star. That comes out to about 40 episodes watched in the past 3 weeks, only two of which I've actively watched the series. Hey, what can I say? When your wife is off traveling to foreign lands, you have a lot more free time living a bachelor life. Anyhow, I've picked up some new lessons hidden in the plot of FOTNS. I'm still really enjoying watching Kenshiro kick ass, but these little points stuck out for me:

In the capitalistic model, it's money. But we all know (hopefully we all know) that money isn't everything. So, then what does motivate us? I thought this video had an interesting answer:

I thought the results of higher financial incentives leading to worse performance in cognitive and creative jobs was telling. It mirrors my own experience. Don't get me wrong. I DO like getting paid and would have absolutely no complaints about earning more money. But that's never been the drive behind my choices. I was groomed for and pushed to medical school most of my youth, primarily because the medical professions pay well. That didn't sit well with me since I'm pretty sure I couldn't stand doing a job I hated merely for money. So, I became a black sheep in the family by going to engineering school. There are a ton of jobs out there that I could have done that would be paying a heck of a lot more than I earn now, but I decided that job misery simply wasn't worth it.

As a side note: if monetary incentives are mostly ineffective at boosting job performance, you have to wonder why it's so commonly used in the financial sector. That would seem to select for greedy, self-interested people who get dumbed down by the financial incentives. Maybe that's not the greatest combination for an industry which drives a large portion of the country's economy.
Posted by jkuo at 5/30/2010 05:42:00 PM No comments:

Lessons from Fist of the North Star

I've recently started watching Fist of the North Star since I've discovered the Hulu has the complete series. I had watched the animated movie in college, but I never saw the t.v. series. I'm around 17 episodes into the 152 episode series, and I must say I am enjoying it (1980's graphics and all). But I am glad that I didn't watch the series as a kid. While it is technically a cartoon, I'm not entirely sure my 7-year old self would have been quite ready for all the animated gore. I also think that the cartoon quirks may have taught me some erroneous lessons. So far, I've noted several themes/messages/patterns in Fist of the North Star:

Despite all these points, I'm still thoroughly enjoying the series. There's something gratifying about the cheesiness and animated bad-guy head explosions. And hearing the predictable "you don't know that you are already dead" hasn't gotten old even after 17 episodes. I'm sure I'll find more quirks (and plot problems) with the cartoon, but I plan on finishing all 152 episodes anyway.
Posted by jkuo at 5/10/2010 11:26:00 PM No comments:

Conventional wisdom tells us that weight training increases bone density (ex. here and here). The force of your muscles moving a load stresses the bones slightly and causes them to grow back stronger. That's a decidedly good thing, at least assuming that you don't do anything really (excuse the pun) bone-headed like lift weights you're not ready for or do exercises with terrible technique. Imagine my surprise when I catch this bit of news: "Weight-bearing exercise does not prevent increased bone turnover."

My response to that headline was a bafflement. I thought there was going to be some crap study on how weight bearing exercise didn't do anything for your bone health. Turns out that it's a study about how jogging and walking don't mitigate the increased bone turnover that occurs during weight loss. Apparently, you have increased bone remodeling when you lose a lot of body weight. This makes inherent sense: less weight = less load on the bones = less stimulation for bone growth. The thing that bothers me with the study is how "load-bearing" exercises are defined. I guess getting my ass up and walking around is technically putting a load on my bones. But it's as much of a load bearing exercise for a healthy person as is picking up a remote to change the channel on the idiot box. I'm not sure when "walking" and "light jogging" became considered "load-bearing" exercises. Have we became that sedentary that everyday activities have become tough exercise?
Posted by jkuo at 3/12/2010 09:56:00 AM No comments: 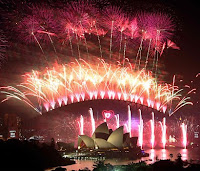 Anyhow, it's another year down, and another year of New Year's resolutions for me. How did I fare with last year's goals? Not great, but not too bad. I didn't do great with my goal of having more "me" time. I did end up having more time for myself by virtue of quitting my job with my last tyrannical boss and taking up a new job with a new company run by sane people. On the other hand, my time just filled up with other things. Some of those things were out of my control, like my wife being in her tenure review year and thus shifting a lot of responsibilities to me. Other factors were under my control, like my habit of try to do too much.

My goal of getting into a consistent I-Liq Chuan training was also a mixed success. My personal practice habits were pretty hit or miss all year. I did manage to get myself into consistent daily meditation practice though, and I did manage to get my class started. I've been told that my spinning hands has improved despite my poor practice habits, so I've managed to accomplish something with regards to my ILC training (if not as much as I'd hope to accomplish).

As far as my fitness goals went, I think I was also only half successful. I finally got the handstand, though it's a little wobbly and I can't hold it for more than 4-5 seconds. The iron cross goal was too ambitious, but I can actually get my arms out to maybe 60ish degrees, which is far better than it would be if I had never made that goal. I can do a dragon flag and almost do a full front lever, but both of those strength skills aren't rock solid yet. I got up to a 70 lb weighted pull up and dip (just another 80 lbs to go for the 2X bodyweight goal). Deadlifts maxed out at 225lbs for me, so I'm still about 75 lbs shy of the 2X bodyweight pull there. I didn't meet any of my fitness goals, but I knew they were too ambitious. I just made really good progress towards them.

So, what are my resolutions for this year? Well, I'm going to try being less ambitious this year. I'm intentionally not going to make any fitness goals. I'm just going to continue having fun working out with my buddies and continue making steady progress to the goals I set out previously. I'm also going to purposefully not make any specific goals of improving my Mandarin, picking up my guitars again, dropping my body fat, etc. My only two goals this year are to:
So, that's it. Here's to another year of improvement.
Posted by jkuo at 1/01/2010 01:58:00 PM No comments: