Dinner, the breakfast of champions 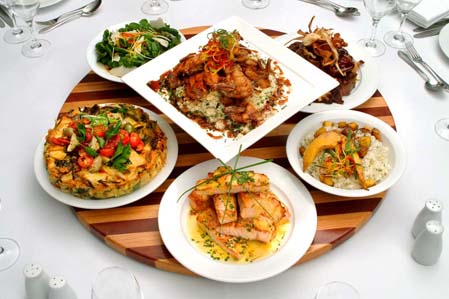 Some people think I'm weird for wanting "real" food first thing in the morning.  I say people who need lighter fare to ease them into the day are the abnormal ones.  If I've just gone over 8 hours without eating anything, I'm going to be starving hungry.  In fact, it's not unusual for me to wake up at 4-5 in the morning starving hungry if I had a particularly hard workout and too light a dinner the day before.  When I wake up, I want real calories from a real meal.  The other stuff (the typical sweet breakfast foods) are good in addition to my first real meal of the day; they just don't work for me as the complete breakfast.

As far as weird dietary habits go, I think my breakfast preference is pretty innocuous.  Breakfast (not dinner) is supposed to be your most substantial meal of the day, so I figure I should get just as much food at breakfast as any other meal.  Plus, I think it's terrible to start off the day with the typical carb heavy, processed food breakfast (I'm thinking of crap like pop tarts and sugary cereals here).  Even worse and weirder to me are the people who start off their mornings with a Coca-Cola.  An acidic, completely artificial drink with nothing but empty calories is not what I want first thing in the morning.  I just prefer French bread pizza to French toast for breakfast.  It's weird to some, but it's the way I like to start off my day.