Well, I don't exactly have a mini genetic clone of myself. Even if that were technically feasible, I'm not sure it's a wise idea to have a mini-me wandering the world. I think full size me is all the world is ready to handle right now.

What I do have now is a Dell Mini 9 netbook with Mac OS X installed on it. Yep, I've fully caught the Mac fanboy syndrome. I was hooked after my first hackintosh, so I wasn't satisfied with the default Ubuntu install on my netbook. I was intent on making myself a mini-mac. After an initial hurdle of not having a recognized usb boot dvd drive, I got Mac OS X installed in under an hour. Then there was the task of shrinking the install so I could install the 10.5.6 combo update and MS Office (believe it or not, I do actually do work on my computers). Then I had to get two finger scrolling working on the touchpad. All in all, probably about 2-2.5 hours of install time, most of which I was surfing on another computer. 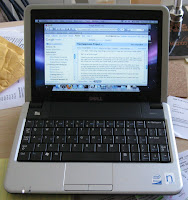 My mini-mac works surprisingly well. Ok, maybe not it wasn't so surprising since I extensively researched the Mac compatibility of the Mini 9 and people's general experience with hackintoshed Minis. I won't say that I can do serious work on my Mac mini. The non-standard keyboard and mini keyboard really slow me down. I did manage to create a short two page technical document on it; I won't say that was an efficient process. But for surfing the web, typing out short blog posts, checking my mail, etc. on the couch or on the road, my mini-mac really shines. And chicks dig the mini notebook. So far, the typical response has been "Oh, it's soooooo CUTE." It's not the typical compliment I like having thrown at my manly ego, but I'll take it.
Posted by jkuo at 4/23/2009 09:21:00 AM

I bought one of those Minis with Linux installed a few weeks ago, just for the hell of it. It will be nice for bringing with me on trips and out to the living room. It's a pretty good computer, especially for the price.